There were always adventures at The Ridge. This one started out as a 500K attempt but as I approached Howard Reservoir near Lockhaven the ridge stopped working and I was forced to land in a field on the other side of the lake. This worked out all right until I tried to find a phone to call my crew. After an hour or so I discovered that I was on an Island. Eventually I located a small bridge and was able to find a pay phone at the closed up Park Service building. I got hold of Pat DeNaples and, as it was only about 25 miles, I figured that he’d be there shortly. Several hours later he arrived. It turns out that he turned too short leaving the gliderport and hung the trailer up on the guard rail blowing out a tire in the process. On the way back we saw a gas station with a stack of used tires outside. We thought it would e a good idea to pick up another tire so we asked the proprietor if he had a 13 inch tire in the stack. He told us we could look and see which we did and located one with some tread on it. Pat asked him how much and he said 2 bucks. Pat said, “does that include mounting too?” and he said, “O.K.”. Thirty years later we still had that tire on the trailer. Incidentally, some years later Dick Eckels landed on that same island. – Bob Root (2/2016) 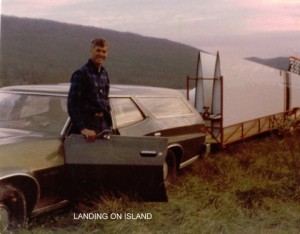